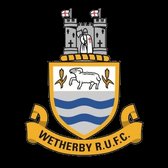 Grange Park was its usual climatic contradiction for the promotion decider against Wensleydale, with beautiful blue skies suggesting a warm afternoon ahead but a 20 mph cross wind and wind-chill of minus 10 meaning spectators were wrapped up against the elements. The Wetherby team ran out, resplendent in their red and white hoops to a rapturous applause from the 200+ supporters there for this historic day.
The Wetherby scrum is feared throughout the league and the early evidence was that the forwards were going to play a major part in this match. The first, led by Stephen Hoather, Ross Fowler and Bradley Mason saw Will Blakey pick up at the back and off load to Harry Johnson who expertly set up Sam Little who danced around the Wensleydale defence like Michael Flatley’s Feet of Flames, dotting down under the posts and converted by the steely eyed Archie Youlden. The perfect start.

But Wetherby weren’t going to have this match all their own way and despite more strong scrum pressure supported by the Peter Pan like James Greenwood and Will Palombo in the second row, and solid tackling from centres Rob Adair and Harry Kaye, Dale made their way in to the Wetherby 22. The usually inscrutable Palombo failed to make any effort to bend in to the tackle and was guilty of a very high tackle and subsequently yellow carded sending Wetherby down to 14 men. The following phases of play saw Dale make the most of their advantage and scored a converted try on the 20 minute mark. 7-7.

This wasn’t to be a forward’s game all day and the outside backs of Alex Parrish, Adrian Connelly and Sam Little were making more and more of an impact in the game. Connelly tidied up a Dale clearance and ran strongly back in to the Dale half, superbly supported by Parrish who grubbered through but Dale were alive to the threat and grounded the ball to force a goal-line drop out. Wensleydale were making full use of the slight wind advantage to exit their territory effectively through their fly-half’s big left boot.

The following 10 minutes were relentless pressure from Dale with a penalty leading to a 7-10 scoreline and some significant nerves from the spectators gathered. And on the 37 minute mark, more pressure from Dale led to a further try and a worrying scoreline of 7-15. Was this match slipping through Wetherby’s fingers like the Hullensians match 2 weeks ago? Not according to Captain Hoather who just before the restart roared, “Don’t panic lads”, akin to Lance Corporal Jones, but it worked…

Wetherby’s lineout, dominated by the leaps of club sponsor LMES’s very own Elliot Reid, was building the pressure on Dale and subsequent mauls were working well. Hoather, always alive to an opportunity, sniped off the back and set up Jarrod Dixon for a cheeky nudge behind the defence but the ball agonisingly bobbled in to touch.
Half time, 7-15.

Wensleydale kicked off the second half with the gingery replacement, Will Atherton coming on for Dixon at scrum half and adding a bit of heat to the proceedings. Having been badly injured at the end of the Keighley match 3 weeks ago it was frankly a miracle of modern medicine and the support of our physio, Emma, that he could even get on to the pitch. Early second half injuries to Bradley Mason and Will Blakey saw the introduction of Adam Shaw into hooker and Josh Draper into the back row.

Wetherby started on the front foot as a reshuffled backline toyed with the Dale defence. A clever Archie Youlden kick through a gap forced a knock on by Dale on their own 10 metre line. Surely Wetherby could make the pressure tell? The Wensleydale defence stood resolute and a solid clearance took Wetherby back to the half way line. With the Wetherby possession building Harry Kaye picked up a loose the ball on the half way line and danced through the Dale defence, seemingly with the try line at his mercy. The crowd held their breath, a silence of expectation descended over Grange Park, only to see him fumble a knock-on whilst attempting a pass to Sam Little who would surely have got Wetherby back in the game. The crowd groaned, turned their backs to rue the missed opportunity. Was this going to be the final headline of the afternoon – “Kaye knocks on in guaranteed try scoring position to lose historic promotion”. Well not if Adrian Connelly and Sam Little had anything to say about it.

Wensleydale counter attacked and broke dangerously down their left wing. With their full-back cutting back inside looking certain to score, the attack was snubbed out by an outstanding try-saving tackle from Sam Little and allowed Wetherby to get back on the front foot again. A big Wensleydale clearance was gathered up by Connolly deep in the Wetherby half and he looked up to pick out the perfect route to the try line. 60 yards later he was tackled a yard from the try line, an amazing run, but one that still doesn’t create that illusive try. 15 minutes left and Wetherby might have been running out of ideas. No they weren’t.

Another great scrum by Wetherby and the backs are in full flow once again. Harry Kaye and Rob Adair create an overload with some magical movement the likes of which could have graced a Strictly Come Dancing final, with Sam Little popping up like an overeager spaniel to run at the Dale defence. But he wasn’t going to be able to take them on his own and Connelly had no problem supporting the run, bamboozling the Dale full back and scoring to bring us within a point. Had the tide turned?

Weth were straight back on the front foot and forced Dale back in to their 22 where Atherton shipped a lovely pass out to Kaye who, with the vision of a Seahawk hunting a lamb, fired a pinpoint pass in to the wind to Little who pumped those muscly little quads and glided over the line. Archie Youlden completed with the conversion. 21-15. The crowd erupted as Wetherby pulled ahead for the first time in the second half.

For all Weth’s dominance, it was again the backs who conjured up a final piece of magic. Any chance of the slim possibility of winning the league resulted in Wetherby getting a fourth try and securing a bonus point win. The ever vigilant Archie Youlden, playing true ‘heads-up’ rugby from full back, spotted the Dale defence in disarray and exploited an opening but having never been the quickest he looked left for some support and there popped up Connelly to finish excellently and surely score the decisive try. The conversion into the wind was missed but Wetherby now had breathing space. 26-15.

Amazingly Wensleydale still hadn’t given up and their centres were hoping some direct running was going to bear fruit. Let me introduce you to the iceberg that is Rob Adair. You could hear the hit from 40 yards away as the Dale centre experienced the full force of those wonderful glutes, powering the player back and to the ground. It was beautiful. The crowd went wild.

With 2 minutes left Dale were still asserting pressure and despite the points gap the supporters were getting nervous. Archie Youlden was yet again in the right place at the right time to tidy up and launched a clearance in to the Dale 22, where, if it weren’t for a cynical foul by the Dale No 11, Wetherby would surely have had a final try.

With a massive sigh of relief, and cheer from the supporters, the referee blew for full time and the promotion was guaranteed. The celebrations were immense in the club house afterwards, supported by the Wensleydale team who were great sports and joined in with impromptu karaoke, naked laps and boat races. A brilliant day at Grange Park and for the wider Wetherby Town. Yorkshire 1 beckons. Final score 26-15.